This article was reposted from CBS News for the interest of our audience, click here to read the article on their website.

Although Walt Disney executives have remained mum on when the company’s theme parks will reopen in the U.S., recent steps by the entertainment giant suggest it’s preparing to unlock the doors soon.

One sign is that Disney Springs, the restaurant and shopping area inside Walt Disney World Resort outside Orlando, Florida, will reopen May 20. The move hints that Disney believes it can handle thousands of visitors on its property while ensuring no one will catch the coronavirus that causes COVID-19 disease. It also means that the resort hotel and theme park rides and water attractions could reopen next because those are the only two sections that will still be closed.

Another sign: Disney Shanghai Resort welcoming back visitors May 11. Reserve tickets in China have already sold out, with some days’ slots going within minutes.

An exact date for U.S. theme parks reopening is unknown, but there’s one thing for certain: Visitors will walk into into a vastly different park experience than what they remember pre-coronavirus. There will be fewer people in the park as a way to ensure social distancing, everyone will be wearing masks — workers and visitors — and families likely won’t be able to take pictures with Elsa, Aladdin and some of the other popular Disney characters.

“They’ll need to keep their costs down, so they’re not going to open every hot dog stand, and some rides won’t be available,” said Martin Lewison, a business professor at Farmingdale State College in New York who studies the amusement parks industry.

Disney employees who don full costumes to portray Goofy, Donald Duck and Minnie Mouse will likely interact with families because the costume headpieces can act as masks, Smith said.

But employees who portray unmasked characters like Princess Jasmine or Pocahontas likely won’t be present because they would have to do so while wearing masks — and Disney would hardly want pictures or videos surfacing of their key characters in masks, said Smith, a former Disney employee.

Dr. Tara Narula answers viewer questions about going outside safely as states reopen
It’s worth reopening theme parks soon, despite the limits, because utility bills are piling up at the facilities and there will be high demand initially, the experts said.

“People have been cloistered in their homes and they just need to get out,” Smith said.

Disney World and Disneyland were closed by March 15 as coronavirus cases increased across the nation. Days later, Disney halted its cruiselines. The company’s retail stores and theater shows also have closed.

The company is likely losing about $500 million for every two weeks the Disneyland and DisneyWorld theme parks remain closed, Chief Financial Officer Christine McCarthy said during a conference call with analysts this week.

Disney will be operating at a loss immediately after reopening the parks, but getting some income from fewer visitors is better than getting no money at all, Lewison said.

A lesson from China?

The theme park experts cautioned that their thoughts are educated guesses. There’s no way of knowing what rules Disney will impose. The company’s reopening procedures in China, however, might serve as a sneak peek at what’s to come stateside.

When Disney Shanghai reopens, visitors and staff must wear masks except when eating.

“The only characters that will not wear masks are the face characters and they’ll be at a distance from crowds,” CEO Bob Chapek said in an earnings call this week to discuss the company’s latest financial results. 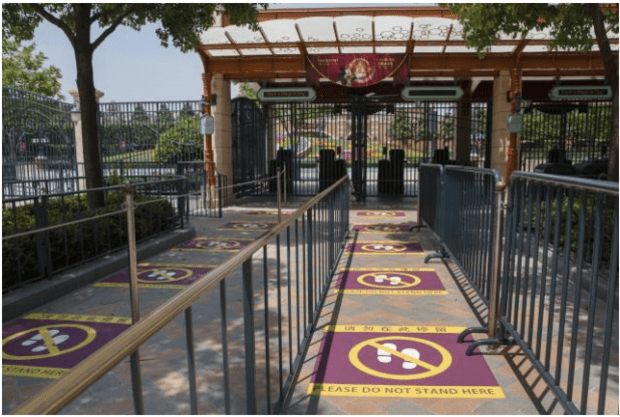 Visitors returning to Disney Shanghai in May will have to keep their distance from others. An image shows ground signage directing patrons on how far to stand apart when waiting for rides or restaurant food.   Walt Disney Co.
Disney Shanghai visitors must also undergo a temperature screening at the gate and maintain proper distance while waiting in line for rides and restaurants. There will be hand sanitizer stations at the restaurant and stores. Tickets will be sold online only and offer specific dates and entrance times.

To minimize crowds, Chinese officials also placed a 30% capacity limit on the Shanghai resort, a facility that normally sees 80,000 visitors daily. That means the park can only accommodate 24,000 patrons per day

“We’re going to actually open up far below that just to have our training wheels on with our new procedures and processes to make sure we don’t have any lines backing up either as guests are entering into the park or as they wade through the park,” Chapek said in the earnings call.

There’s no promise the company will handle U.S. theme parks through reservations the same way it’s doing in Shanghai, Chapek added. But some of those same measures will likely appear in Florida and California, both Lewison and Smith said, particularly the decreased capacity limits, masks and hand sanitizing stations.

Disney plans to reopen Disney Springs with “limitations on capacity, parking and operating hours,” Vice President Matt Simon said in a statement this week. Disney hasn’t released specifics on the capacity, parking or hours, but said employees and guests must wear masks.