Sports Are Restarting in a ‘New Normal’

This article was reposted from NY Times for the interest of our audience, click here to read the article on their website.

The rules for returning differ among counties, states and countries, but the athletic world is beginning to creep toward competition again. 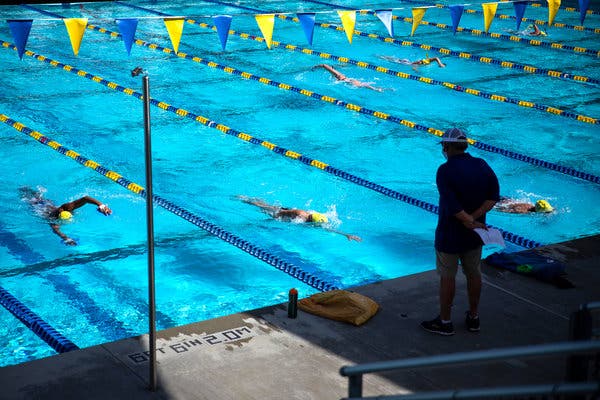 By Karen Crouse and Matthew Futterman

The 18 swimmers entered the outdoor pool deck in a drawn-out procession, taking care to stay 10 feet apart from one another. On the walk to their individually assigned lanes, the Mission Viejo Nadadores team members glanced at the giant scoreboard.

On the screen where their successes and failures are usually illuminated, their coach, Mark Schubert, had keyed in a message: “May the new normal teach us to be grateful for the things the old normal taught us to take for granted.”

Across the United States and throughout the world, sports are slowly awakening from their two-month respite during the coronavirus pandemic. As countries start to ease lockdown restrictions aimed at stemming the spread of the contagion, soccer teams in Germany, Spain and Italy have resumed training in the hopes of resuming their seasons, professional golfers are eying a late spring return to competition and touring tennis pros learned this week that an altered version of a season is in the works. Professional baseball began again in South Korea on Tuesday, some N.B.A. training facilities may open Friday, and the Ultimate Fighting Championship and NASCAR plan to hold events this month without fans on site.

But the sports world is a many-tentacled behemoth, and its return to life is characterized by uneven circumstances. While golfers living in some parts of the United States have had largely uninterrupted access to courses, counterparts in other states or in other countries, like Britain, have been reduced, at best, to hitting wedge shots into netting in their backyards.

There are tennis players, swimmers and track athletes who have access to personal facilities or reopened public spaces, while others in neighboring counties, states or countries remain severely restricted. Austria has opened Olympic training centers. The United States Olympic and Paralympic Committee has not decided when it will open its centers.

In the United States, 50 states may produce 50 different sets of regulations. Athletes in some European and Asian countries may have a hard time traveling elsewhere. The different guidelines and realities, depending on geography, complicate each athlete’s efforts to get back into competitive shape.

This timeout has left fans thirsting for games and athletes desperate to compete. Mary Jo Kane, a longtime sports sociologist at the University of Minnesota and an avid follower of the Chicago Bears, recalled crossing paths recently with another N.F.L. fan who threatened to go on a hunger strike if there was no football in the fall.

“Just the very fact that we’re trying to figure out ways for sports to continue without fans shows you how much we deeply want and need sports,” said Kane, who spoke by telephone after finishing a nine-hole round of golf, a part of her weekly routine she missed when local courses were closed.

Yet any psychological benefits of bringing back sports must be weighed against the potential physical harm.

In an interview last week, Dr. Jonathan Finnoff, the chief medical officer for the U.S.O.P.C., said that as restrictions are reduced, “there will be a potential for outbreaks, and we have to anticipate that will happen.”

Those fears gained traction in Germany this week when 10 players from the country’s soccer league were found to have the virus after blanket testing of 1,724 individuals from 36 teams. Anton Olsson, a Swede who captains a third-division team in Orebro, his hometown, has watched other countries ease their restrictions with growing unease. “It’s frustrating,” said Olsson, whose team continued to train during the pandemic in accordance with Sweden’s looser restrictions.

“It’s really hard to know which way is best,” Olsson said in a telephone interview. He described three or four people on his club, including a coach, who have been sick with coronavirus symptoms and added, “Everyone on the team should have had it or are going to have it.”

Sandra Gal, a professional golfer from Germany, stayed in the United States until the end of March, then traveled home to be with her boyfriend and family. Because all of the courses in her state were closed, Gal bought netting so she could hit balls at a nearby park and at home.

Last week she drove two hours to practice in a part of Germany where courses have opened. This week she learned of a special exemption that her state gives professional golfers to practice on courses that are otherwise closed. “Now it’s going to start feeling a little more normal,” Gal said.

In the United States, while some business are reopening, no state is at the point where gyms, pools, training centers or even open-air running tracks are widely open.

Athing Mu, a standout half-miler, lives in New Jersey, where Covid-19 remains rampant and training facilities, most of which are at schools, are closed through the end of the academic year. Mu is running on city streets for now, dodging traffic near Trenton as she does mile repeats at a six-minute pace, said Al Jennings, her coach. Jennings is hopeful that parks and some school facilities may open soon. Mu, a potential Olympian, is supposed to enter college in the summer, but no one knows when intercollegiate sports might return.

In guidelines issued last week by the U.S.O.P.C., Finnoff said that public health authorities must say it’s safe for small groups to gather before any training may occur at public facilities.

Even then, the guidelines say, training should not be conducted as usual. Initially, athletes should socially distance, use their own equipment and wash any shared equipment with antiseptic cleaners. They should also wear facial coverings and avoid direct contact with other athletes — so no contact sports.

A tennis player can hit alone, but not with another player, who might wipe away the sweat on her face then pick up the shared ball. A basketball player can shoot but not pass. Anyone who moves to a less restrictive state should quarantine for 14 days before training, or have two negative results on Covid-19 tests.

If competitive sports do resume in the near future, they will almost certainly be contingent on widespread testing and fewer people interacting. The L.P.G.A., which has made plans to restart its season in July, circulated an email to players and caddies that said not to expect fans at its first few events. This week, World Team Tennis announced plans to bring its nine teams to a single city, which is yet to be determined, and to play the 2020 schedule, tentatively starting in July, with a revamped format at a single venue.

“It gives everyone some comfort, and right now, in the last 45 days, there hasn’t been a lot of hope and comfort,” said Carlos Silva, the chief executive of World Team Tennis.

Half of the Nadadores’ elite group was able to return to the pool last week.Credit…Jenna Schoenefeld for The New York Times

In Mission Viejo, Schubert got half of his 36-member elite group to return to the pool, using social-distancing guidelines provided by U.S.A. Swimming and approved by the city’s mayor, Brian Goodell, a Schubert protégé who won two Olympic gold medals in 1976.

Most nearby teams haven’t received similar backing from their local government agencies, a disparity that illustrates the complexities and inconsistencies for sports and many other industries. Terry Stoddard, the general chair for Southern California Swimming, noted that his organization has 160 member teams and said: “I wake up every day and try to figure out how to get the other 159 teams in the pool.”

For Mission Viejo’s Katie Crom, 16, the seven-week layoff was her longest since she began competing in 6-and-under age-group races. Crom, one of the country’s best butterfly specialists, said she was glad to be back swimming, and not just for the exercise.

“It is really great to see my friends again, even at a distance,” Crom said in a text message. “That is something we certainly took for granted.”

Crom and her teammates arrive wearing their suits, since the locker rooms remain closed, and enter the pool deck from the parking lot one at a time. They don’t stray from the middle of the lanes as they complete 75-minute workouts that are written on paper and affixed to the end of each 25-yard lane set up across the width of the 50-meter competition pool. Schubert wears a surgical mask and stands far enough away, Crom said, “We can barely hear him.” If the swimmers have to use the bathroom, they must trek up a hill to the single toilets at the swim school, and they are required to sanitize the toilet afterward.

“Nobody has asked to go to the bathroom,” Schubert said on Monday. “I think because nobody wants to clean the toilets.”

Or perhaps, as Crom suggested, after being kept out of the pool for so long, nobody wants to miss a single minute in the water. “Before the quarantine we took everything for granted,” Crom said, adding, “Swimming in a pool and lake was always available, since I was a child. I never thought that water would be restricted.”