This article was reposted from CNBC for the interest of our audience, click here to read the article on their website.

As people self-isolate to help stop the spread of the coronavirus, virtual tours are the only way most of us have to explore the world’s greatest places.

But many of those tours are underwhelming. They don’t work, or it’s simply too hard to locate the 360-degree imagery.

To remedy that, here are five easy-to-navigate tours of inspirational UNESCO World Heritage sites around the world.

With China apparently apparently succeeding (for now) at containing Covid-19 by shutting down most of the country earlier this year, locals and tourists have been unable to venture to Zhangjiajie National Forest Park, part of the breathtaking Wulingyuan UNESCO site in the country’s Hunan province. 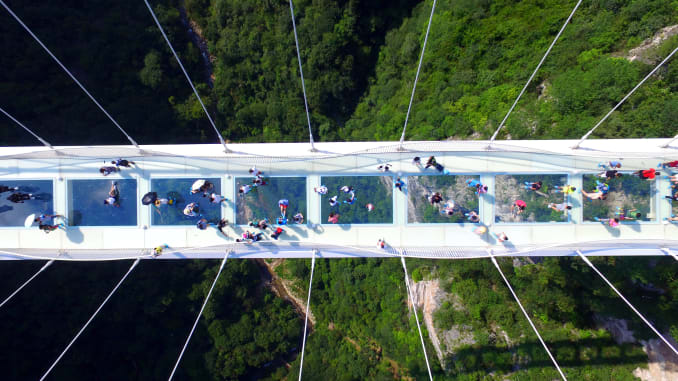 China’s Zhangjiajie Glass Bridge is one of the longest and highest glass bridges in the world.
Feature China | Barcroft Media

It also didn’t help that the glass-bottom skywalk spanning the Zhangjiajie Grand Canyon — the world’s highest and longest glass-bottom bridge when it was finished in 2016 — was temporarily closed last fall for safety checks. Built 600 feet above the canyon, the structure is nearly 1,000 feet long with glass panels that are less than 2.5 centimeters thick.

All the better reason to visit the Zhangjiajie Glass Bridge virtually. And thanks to the good folks at Russian virtual reality photography company AirPano, now you can.

To prove its safety, a car was driven over the Zhangjiajie Glass Bridge in June 2016.
VCG

With a few clicks of your mouse, maneuver over and around this vertigo-inducing, man-made wonder as well as the canyon river it traverses.

See the bridge and canyon here.

Speaking of heights, with its stunning stone architecture, stellar Andean mountain views and mysterious history, Machu Picchu has long been the top tourist destination in Peru, if not all of South America.

Constructed in the mid-15th century by the Inca people and nestled 7,970 feet above sea level, these archaeological ruins are an engineering marvel. Machu Picchu was voted one of the new seven wonders of the world in a recent Internet poll.

Carved out of two peaks, Machu Picchu (which means “Old Mountain” in Quechua) is believed by archaeologists to be the estate of the Inca emperor Pachacuti. It represents the height of the Inca Empire’s power before it was abandoned following the arrival of the Spanish conquistadors.

If you can’t make the four-day adventure hike up the famous Inca trail in person (or take the shuttle bus like daytrippers), have a look around “The Citadel” via this 360-degree tour. Assisted by an audio guide, you can see Machu Picchu’s steep slopes and the remnants of royal residences, the sacred district that includes the famous Temple of the Sun, and courtyards with grazing alpacas and llamas on the lawns.

Go inside the Sydney Opera House

A UNESCO World Heritage site since 2007, the Jørn Utzon-designed Sydney Opera House in Australia is an architectural masterpiece. Construction on the iconic shells, which house multiple performing arts venues, first began in 1959 and was finally completed in 1973.

In response to an intentional design competition, 233 designs were submitted for the Opera House. The design by Denmark’s Jørn Utzon was chosen, though he later quit the project over timing and budgetary concerns.
Michael Dunning

This 360-degree experience, created in partnership with Google Cultural Institute, provides a virtual day in the life of the Opera House, starting with a beautiful time lapse of the sun rising over Sydney Harbour followed by a graceful cello performance by musician Ben Schwartz in The Utzon Room.

After journeying through the venue’s fabled halls, viewers meet the marvelous young soprano Nicole Car singing the aria “Song to the Moon” from Dvorak’s Rusalka opera. The camera then sweeps upward high above the stage, allowing fantastic vantages not normally granted to theatergoers.

After being treated to a rehearsal of Rimsky-Korsakov’s “Scherherazade” by the Sydney Symphony Orchestra, the virtual tour ends with a time lapse at dusk as ferries cross by and concertgoers file out into the night.

As far as cultural treasures go, Canada’s historic Old Québec City — one of the oldest colonial settlements in North America since its founding in 1608 — is an underappreciated gem. The historic district was designated a UNESCO-site in 1995.

This virtual tour, courtesy of Québec City’s Office of Tourism, offers the uninitiated the chance to go back in time and experience the splendor of what is the most thoroughly European metropolis to grace that side of the Atlantic.

Take a stroll on the Dufferin Terrace for a picturesque view of the St. Lawrence River. Ride the Old Québec Funicular railway from Upper Town to Lower Town along the city’s fortified walls. Soak up the Old World charm of the Petit-Champlain’s boutiques, terraces and Notre-Dame-des-Victoire church and the cobblestone square of Place Royale.

Be sure and check out Breakneck Stairs or the Royal Battery where spectacular views abound of Québec’s port and celebrated Château Frontenac Hotel, a National Historic Site of Canada. Throw in some homemade poutine and a bottle of red wine, and you’ll feel like you’re practically there.

Explore the temples of Angkor Wat

Cambodia’s Angkor Wat temple is a wonder to behold. Built in the early 12th century by the Khmer Empire as a Hindu temple, this enormous sandstone complex was converted into a Buddhist center of worship decades later and has remained that way ever since.

A Cambodian monk explores the fallen stones and tangled roots of Ta Prohm, one of the most famous temples in the Angkor Wat temple complex.
wanderluster

Meditate on the nooks and crannies of Angkor Wat — plus some of the other famous temples in the complex — and the nearby town of Siem Reap in this guided tour brought to you by Amsterdam-based VR Gorilla.

Go inside the temples here.